What Are the Different Types of Pulleys? 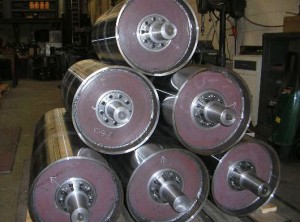 Pulleys are wheels on an axle with a grooved rim around the outer edge where a belt, rope or chain passes. The wheel supports the movement of the belt or cable along the perimeter of the wheel. It is a simple device designed to lift loads, transmit power or apply force.

Although there are numerous types of pulleys, there are three main types; single fixed pulleys, movable pulleys and compound pulleys.

Compound pulleys are an amalgamation of a movable and fixed pulley. The combination forms a block and tackle. It has the advantages of both types of pulleys. So there is no need for pushing or pulling in order to move a load. As well, minimal force is used. Furthermore, when more pulleys are used, lesser force is needed to move the load. On the other hand, compound pulleys take up a lot of room. Plus, items need to be moved over a longer distance.