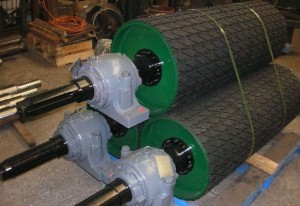 As long as a conveyor system performs as it’s meant to, it goes unnoticed, which is a tad ironic considering the importance of this equipment within a business venture’s production chain. It’s only when the mechanism stutters to a halt that we give the apparatus the credit it deserves. In the industrial realms where quarried rocks and ore-rich aggregate are conveyed along steel-laced conveyor belts, the parts list we’re proposing rises exponentially, positioning high horsepower electrical motors next to precisely engineered pulleys. Belt cleaners and conveyor guards act as supplementary components while load chutes and discharge buckets sit at either end of this kilometres long belt system, keeping the chain of movement flowing from ore seam to surface processing stations.

Pulleys and Conveyor Belts as Mounted in Industrial Settings 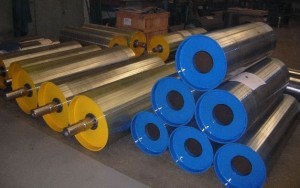 It’s hard to discriminate between these parts when they’re sitting in a sub-surface mine because they’re masked by toughened conveyor belts and narrow subterranean chambers, but bystanders can easily see the importance of pulleys if they stop and look closely. The pulleys appear round when viewed at their profile edges, but the shape resolves to a long cylinder passing beneath the conveyor belt if more light is added to the scene. The rolled cylinders support the belt, lifting and moving the strip horizontally forward or through angled inclines. Further pulleys are strategically located at set intervals along the strip of moving material, acting as deflecting and belt tracking managers until the belt reaches the return pulley, at which point rollers and tensioning mechanisms keep the system tuned. It’s this configuration of pulleys and belts that determine the carriage characteristics of transported raw material.

Placing an Engineering Spotlight on the Pulley
Responsible for both motive force and belt dynamics, the shaft of the pulley is attached to a drive system and freed of friction by lubricated gears and bearings. The rounded profile of the pulley extends outward, covering the width of the conveyor belt as determined by the matter being transported down the belt. The movement of the belt relies on these lubricated parts and the machine fabrication technology used to manufacture the outer shell of the pulley.

Let’s take a break from conveyor system interactions and focus on the drive pulley, a component that locks shaft-to shaft with gears and external motors. Alternatively, there are compact drive pulleys that internalize this configuration, placing the transmission drive inside the cylindrical shell of the pulley. Shaft radial movement, bearing integrity, and a slew of other design characteristics determine the quality of the drive shaft, although the direct interaction between the belt and the shell suggests that the precision manufacturing process used to form the outline of the shell is the determining factor that delineates conveyor dynamics.