The Importance of Conveyor Pulleys in the Mining Industry 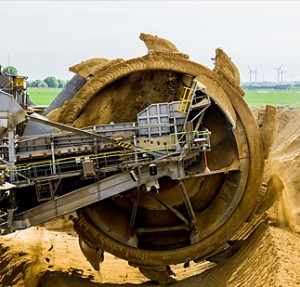 Before beginning properly, imagine a conveyor belt that crosses sixty miles of desert. The Moroccan desert employs such a system (gizmode.com), an unending series of pulleys and belts that can almost be seen from space. This extreme example of mining industry conveyance illustrates the invaluable nature of conveyor pulleys. The reinforced belts are the passive material bearers in the above example, but the army of pulleys apply dynamic forces to the process, enabling road-free zones to transport valuable ores and minerals to shipping stations and processing plants.

The demanding requirements of the mining industry don’t typically extend across a sixty-mile (ninety-five kilometre) expanse of hot, empty desert, but the example does serve to emphasise the importance of conveyor pulleys. They’re the bridging mechanisms that sit between the strong belts and the drive system. The drums are necessarily imbued with incredibly tight dimensional specifications. In this way, the ore-laden rocks and streams of aggregate matter are conducted efficiently through the mine without incurring waste, for the earthen material is potentially worth millions of dollars, and lost revenue is not an option. The drums, therefore, carry horizontal streams and inclined masses of just excavated rock smoothly forward. In achieving this optimal flow, the angular framework of the conveyor is divided between each of the pulleys, resulting in a tightly aligned series of drums and shafts, a momentum that ensures one-hundred percent of the mined material is carried to its discharge point.

Increased service life is a must-have in this scenario. Bearings are ensconced in special housings to prevent clouds of coal dust from penetrating rolling elements. The belt cladding and other proprietary drum specifications are reinforced to handle transient impact events and the general wear and tear that results from a setting where rocky matter is bouncing across conveyor belts. The conveyor pulleys absorb much of this chaotic impact as it’s transferred through the steel-laced belt. The cladding prevents mechanical transmission, stops the shock energy from radiating to delicate bearings and other rotating elements. It only takes one massive impact to throw the alignment of a single shaft out of orbit, which means the ability of the drum to absorb such shocks is a critical part of the final design.

The mining industry employs “mine-duty” components, pulleys and pulley shafts that are equipped with toughened features that go above and beyond heavy duty equipment. Built to rotate smoothly across kilometres of desert and subterranean chambers, every pulley is a strong link in a strong chain of an expensive excavation process.