Timing Belts and Conveyor Pulleys: How Do They Work Together? 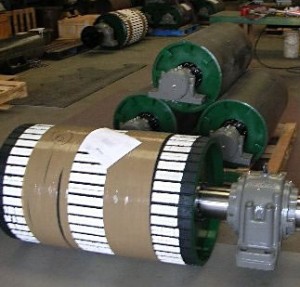 Customers already identify conveyor belts as idealized linear transporters. What is perhaps not so well known is how multiple conveyor systems operate behind the scenes? They work as two or three tiered branching streams and use this multiplied form to convey luggage or split sorted streams of aggregate matter. Of course, these rubber belts and tightly arranged pulleys only look separate to the untrained eye. They’re actually working in tandem, employing timing belts and conveyor pulleys to inject synchronous operation into the diverging mechanisms.

Examples of timed belts can be found anywhere. Even an ordinary car uses one of these parts-meshing components. The belt synchronizes all of the mechanical systems in an internal combustion engine, which ensures the pistons open, close, and the cylinders create an intake and exhaust stroke. The camshaft rotates, everything happens in the right sequence, and chemical energy is converted into the thousands of tiny explosions that drive the car forward. In plain terms, the timing belt coordinates discrete or separate parts of a mechanical process. Timing belts and conveyor pulleys transplant the same principle into a series of conveyor decks. The result is the fast starting of multiple conveyor decks, a simultaneous pause or acceleration event, as regulated by this time governing rubber belt, and an ability to synchronize matter conveyance across a complex system.

How Do They Work?

The relationship between the timing assembly and the conveyor pulleys is accomplished through physical indexing. The belt meshes with all conveyor decks and uses a “toothed” inner configuration to mesh the various conveyor pulleys together. The timing belts and conveyor pulleys also mesh with other mechanical assemblies, perhaps a sliding platform or an auxiliary arm that swings to redirect the flow in a food processing circuit. Of further note at this point, these specialized belts are not made for drive purposes, unlike other rubberized products. Instead, it’s the non-slip or meshing characteristics of the product that feature prominently.

The notched, indexed, or toothed profiles necessitated by timing components adds an extra layer of complexity to conveyor design. In turn, the conveyor pulleys are typically integrated with an additional flanged gearing assembly, a series of components that require maintenance work to keep the pitch and overall alignment of the timing parts in sync. The timing belt may not be designed as a primary drive belt, but it must still be built of robust materials if the system is to properly interlock the various conveyor decks.